Last week, a special award ceremony at the Department of Biology of the Faculty of Science marked the end of the competition that was part of the interdisciplinary project “Sea is Alive”, implemented by our company and the PAKS society in institutions of pre-primary and primary education all over Croatia, through workshops teaching children about the importance of preserving the benefits of our sea.

The contest was open to students of primary schools whose biology professors have provided additional education on the preservation and protection of the Adriatic Sea and seabed based on the educational DVD and accompanying booklet made in cooperation with the members of the PAKS society led by Maja Novosel, PhD.

We are happy to report the receipt of an unexpected, four-digit number of art works and knowledge tests – as much as 1,300! Students from grades 1 to 4 from 35 primary schools throughout Croatia sent as much as 600 art works, while 700 students from grades 5 to 8 from all over Croatia joined the competition and tested their knowledge on the Adriatic Sea flora and fauna. The overwhelming number of young, creative and intelligent participants even caused the university computer system to “crash” during the submission of works.
The winner of the knowledge competition was much easier to determine than the winner in the talent competition – the committee composed of Maja Novosel, PhD, formally trained painter Diana Sokolić and formally trained painter and chair of the committee Dino Trtovac had a very difficult task of choosing the twelve best art works depicting the sea, algae, plants and animals.

The name of the winner of a trip to Gardaland among the first-awarded students was picked from the magician Jozo Bozo’s hat. The magician’s lucky pick was Mia Kovačić, 1st grade student of the Varaždin primary school from Varaždin. A trip to Monaco, the prize for students with the best knowledge test results, was won by Lana Lešić, student of the 7th grade of Braća Glumac primary school from Lastovo.

The rest of the first-awarded students will participate in an educational workshop from 21 to 22 June 2013 at the Pula Aquarium, accompanied by one parent or guardian with whom they will spend a beautiful weekend in Istria. The second prize were HRK 1000 gift certificates for Algoritam, and the third prize were JGL packages. For all those who are interested in seeing the rewarded art works, they are exhibited at the Faculty of Science at Roosevelt Square 6 in Zagreb. 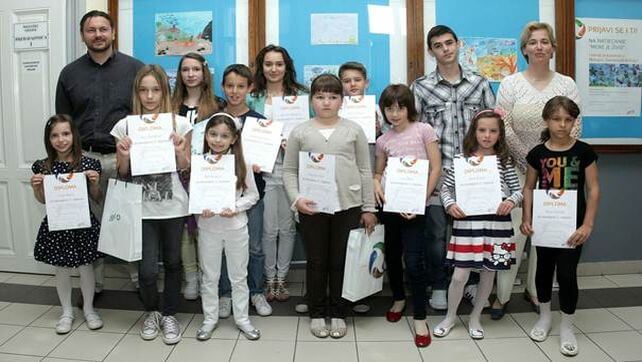