JGL receives the Charter of the Republic of Croatia

JGL receives the Charter of the Republic of Croatia

As part of this year’s celebration of Statehood Day, on 25 June 2013, Croatian president Ivo Josipović awarded meritorious individuals, companies and cultural institutions with state medals and recognitions at the ceremony at the Croatian National Theatre. It is a great honour and pleasure that our company received the Charter of the Republic of Croatia for an outstanding economic contribution and the encouragement of Croatia’s social development, which was received at the ceremony by Jasmin Huljaj, Executive Director of Operations. Larisa Živković, Director of the South-East Europe Region, also took part in the ceremony on behalf of JGL.

Josip Leko, president of the Croatian parliament, Zoran Milanović, Croatian prime minister, ambassadors, and other respected guests took part in the ceremony besides the Croatian president Ivo Josipović. The special performance by the Croatian RTV Symphony Orchestra and Choir helped mark this occasion. In his congratulatory speech regarding Statehood Day, President Josipović pointed out that this was an opportunity to remember Croatia’s difficult path from its fight for independence to its accession into the European Union.

“On this path, Croatia has become a better society, built democratic institutions, and developed human and minority rights. The country’s birthday is an occasion to remember that democracy, justice and freedom are values that we must never forget, and which require constant and firm support,” said Josipović. 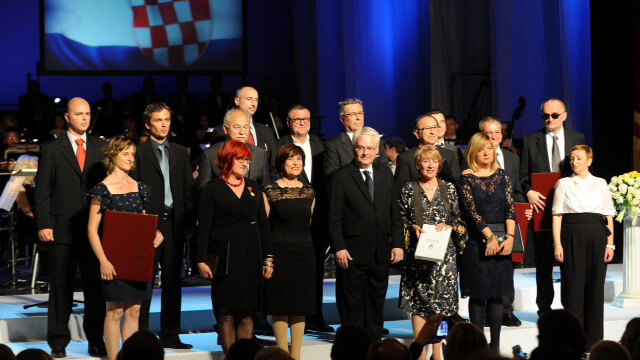 #Charter of the Republic of Croatia #Jasmin Huljaj #Larisa Živković