On 15 April five ministers and their delegations, as well as other representatives of the government, ministries, Croatian Bank for Reconstruction and Development (CBRD), Croatian Chamber of Economy (CEE), the City of Rijeka and the Primorje-Gorski kotar County visited JGL as a part of their participation in the presentation of steps of the ProInvest programme undertaken by the government and aimed at starting an investment cycle and restructuring the economy. In addition to the tour of the existing facilities, the guests were introduced to the construction project of the Svilno 2 complex, known as Pharma Valley, which will serve as an extension of the existing production facilities, increase the company’s development, production and storage capacities and ensure key resources for sustainable and profitable growth in the next ten years.

According to the Minister of Finance Slavko Linić, who visited Svilno along with ministers Branko Grčić, Siniša Hajdaš Dončić, Darko Lorencin and Gordan Maras, CBRD President Anton Kovačev, CEE President Vinko Mičetić, Mayor of Rijeka Vojko Obersnel, Prefect of the Primorje-Gorski kotar County Vidoje Vujić and Pero Lučin, Rector of the University of Rijeka, companies such as JGL which outgrow the Croatian market and become competitive on the global market prove that Croatia has the knowledge and technological capabilities, but also that companies such as these deserve the financial support of the state. After the presentation of the Svilno 2 by the company CEO, Ivo Usmiani, the Deputy Prime Minister and Minister of Regional Development and EU Funds Branko Grčić said that JGL represents an excellent example of conducting business in Croatia.

– The specific feature of this company is that it is a part of a very competitive surrounding with high legislative barriers, which does not allow stagnation, but requires continuous investment into research, development, and, as we have witnessed today, high quality technology. We are pleased to see that JGL grows each year not just in sales, but also in the number of employees, by approximately one hundred people per year and one hundred million in revenue per year. You have reached almost all global markets and continue to expand. This is an example for the development of industry in Croatia: we have to raise its technological level and the added value created in it. This is the only way to ensure economic growth – said Grčić.

The guests at Svilno were welcomed by the entire Corporate Executive Board, and the presentation of the investment, as well as the announcement of results achieved by JGL in 2012 were followed extensively by the media. 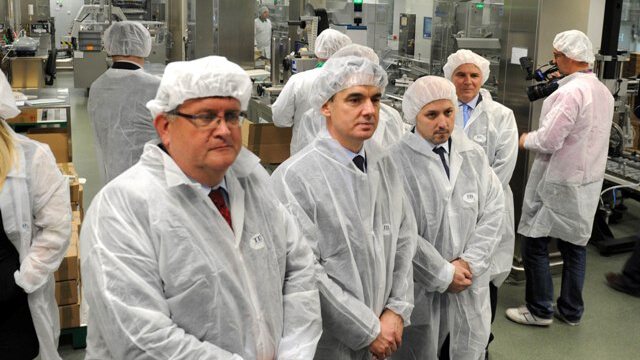