The role of AHCC and probiotics

The role of AHCC and probiotics

Immunity can be strengthened by stimulating the child’s defence mechanisms with healthy living habits, but also by directly affecting immunity, notably through modulation and strengthening of the first line of defence and promoting mechanisms of inherent immunity.

The digestive system is the most important immunological organ. The role of intestinal flora in immune mechanisms is extremely important as it is an integral part of the inherent immune system, it stimulates acquired immunity and forms the acquired immune response. Therefore, today, there is a special interest in products that, based on scientific evidence, can modulate the mechanisms of the inherent immunity.

One such product is a combination of AHCC® and BB-12® probiotic. AHCC® is a mixture of substances in which the major polysaccharide is alpha-glucan, specifically acetylated 1,4-glucan (the rest are proteins, lipids, carbohydrates and small amounts of beta-glucans). It is produced from the mycelium of Lentinula edodes mushroom (Shiitake) cultivated in a liquid medium containing rice straw. Immunomodulatory activity was clinically proven through increased activity of NK cells in immunocompromised individuals, increased number and activity of dendritic cells, increased proliferation of macrophages that play a key role in primary immunity, and increased cytokine response.

Probiotics are live microorganisms that have a positive effect on the health of the host at a sufficient concentration, and they are a natural part of the physiological flora and have no side effects. The strains of microorganisms acting as probiotics belong to the genus Lactobacillus, Bifidobacterium and Saccharomyces. When ingested in sufficient quantities, they colonize the digestive mucosa where they can manifest their benefits. The role of probiotics in immunomodulation is based on mechanisms involving the synthesis of antimicrobials, the fight against pathogens for nutrients, the modification of toxins and the stimulation of non-specific immunological reactions to pathogens. Numerous large systemic examinations found that probiotics are an effective way of preventing and alleviating the problems with many pathological conditions in children, and they are referred to in guidelines as a fundamental part of therapy and prevention of acute diarrhoea.

The type of probiotic bacteria used is important. The effectiveness of strains has been proven by scientific research, and the research results obtained with a particular strain cannot be applied to other untested strains. The choice of probiotic also depends on the disease we use it for, given that numerous research confirms that not all probiotics are equally effective for particular indications.

For the BB-12® probiotic strain, Bifidobacterium, extensive studies have been conducted on its immunomodulatory effects, the ability to modulate specific and non-specific immune response, the restoration of intestinal microflora and high survival rate in the digestive system with high ability of adhesion to the intestinal mucosa. According to scientific research, this strain is safe and has no observed side effects. The combination of AHCC® and BB-12® has immunomodulatory effects, but different mechanism of action. AHCC® is a prebiotic, while BB-12® is a probiotic, and together they have a synergistic, immunomodulatory effect of better resistance to acute infections, as well as strengthening immune defence in cases of long-lasting infectious diseases and in cases of oncological diseases. 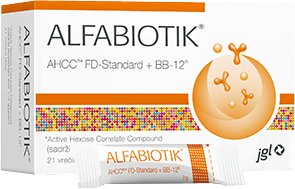 Alfabiotik
Alfabiotik is an innovative dietary supplement for adults. It contains a unique combination of the AHCC®FD complex (acetylated alpha-1,4 glucan) and the bacterial culture BB12®. 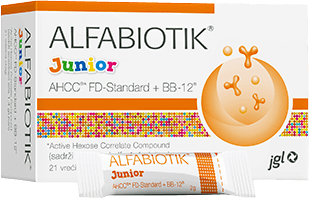 Alfabiotik Junior
Alfabiotik Junior is an innovative dietary supplement for children from 3 years of age. It contains a unique combination of the AHCC®FD complex (acetylated alpha-1,4 glucan) and the bacterial culture BB12®.